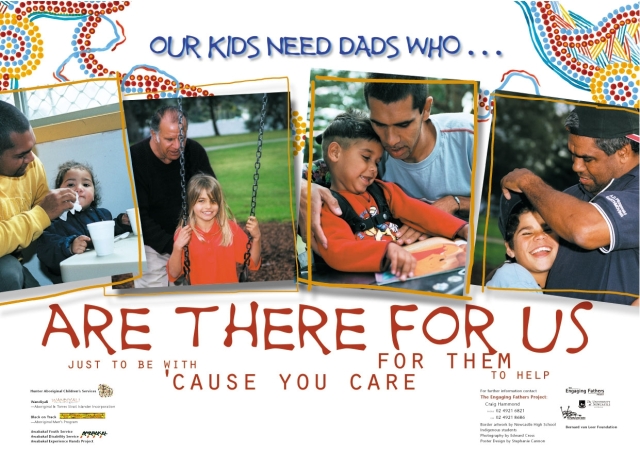 We are surrounded by negative images of Aboriginal men and fathers. In the mainstream media, and even academic literature, they are mostly portrayed in a negative context: the focus is on crime, domestic violence, alcohol and other drugs, unemployment, and child abuse. It is time we started seeing more of the positives. A recent study (Stoneham, Goodman and Daube, 2014) looked at 335 media stories relating to Australian Indigenous health and found that 74% of them were negative, 11% were neutral and only 15% were positive.

Craig Hammond, one of my colleagues at the Family Action Centre, has produced a range of resources (DVDs, posters and a book)  that offer more positive images.  In 2011 he  published a paper Making positive resources to engage Aboriginal men/fathers (Hammond, 2011)  in which he discusses some of his work helping to create posters with positive images of Aboriginal fathers in a number of communities. He argues:

We had to ask our

selves how could it be that a whole society is not thinking of positive images of Aboriginal fathers/men. The images that were available were all about domestic violence, assault, sexual abuse, alcohol and drugs. The messages with these images were about what men shouldn’t do. From there, the project team sat down with men of all ages and talked about the lack of positive images of themselves in the media, on posters and other public spaces. (p. 23)

Working with Aboriginal and Torres Strait Islander  communities in Newcastle, the Tiwi Islands, Yarrabah, Wreck Bay, Alice Springs and Hobart he helped develop a series of beautiful posters that show Aboriginal and Torres Strait Islander in a different light.  The article  (available online from the publisher at a cost of $3.98) includes discussion of the ways in which he engaged local communities. You can read about his other work with Aboriginal fathers (for free)  in the report Reaching the heart of Indigenous families & communities.

When I heard Chris Sarra speak about his work as a principal at Cherbourg School it showed the power of changing how we see Aboriginal people and communities. Despite wide spread negative perceptions about Aboriginal students, he  knew they could be Strong and Smart (the school motto). Unfortunately not all the staff agreed.

We then had to establish a team that believed it could be done; those that didn’t believe it could be achieved were encouraged to move on. And I did sit in the staff room and say to staff, ‘What I believe and what the community believes is that our children can leave here stronger and smarter. If you don’t believe it, then you have to go. And half the staff left. (Sarra, 2005, p. 6. The whole speech is well worth reading.)

It was only when he had staff who really believed in the potential of their students that things could change. These types of negative perceptions are reinforced by the negative images that surround us. We need to to be exposed to more positive images of Aboriginal families and communities and to hear more from people like Chris and Craig who recognise and build on their strengths.