Some definitions of family

Posted on 5 December 2014 by Graeme Stuart 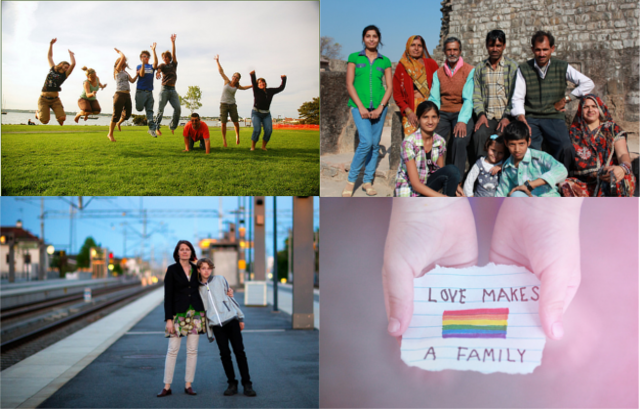 Everybody knows what a family is, but trying to find a widely accepted definition is actually very hard. I’ve been looking at how various writers define families and the following are some examples. I’m not going to comment on them except to say that historically, like today, families took (take) many forms (Beck-Gernsheim, 2002) and so I believe we need to have inclusive definitions of family that recognises the diversity of experiences in relation to families. (Some of the following do not pass this test!) It is worth remembering that defining family can be a political strategy to exclude some people. For example, in 2004 the Australian Marriage Act was amended by the Howard Government to specifically exclude same sex couples from marrying. I do not support this type of exclusion. The family studies I am interested in recognises there is a wide diversity in families.

A group consisting of two parents and their children living together as a unit… A group of people related by blood or marriage (Oxford Dictionaries).

The family is a social group characterized by common residence, economic cooperation and reproduction. It includes adults of both sexes, at least two of whom maintain a socially approved sexual relationship, and one or more children, own or adopted, of the sexually cohabiting couple (Murdock, 1949 quoted in Steel, Kidd, & Brown, 2012, p. 2).

Two or more persons, one of whom is at least 15 years of age, who are related by blood, marriage (registered or de facto), adoption, step or fostering, and who are usually resident in the same household (The Australian Bureau of Statistics).

A family is a group of two people or more (one of whom is the householder) related by birth, marriage, or adoption and residing together; all such people (including related subfamily members) are considered as members of one family (U.S. Census Bureau).

A group of persons directly linked by kin connections, adult members of which assume responsibility of caring for children (Giddens 1993 quoted in Steel et al., 2012, p. 2).

Two or more people who share goals and values, have long-term commitments to one another and reside usually in the same dwelling (LoveToKnow Family).

A family is a group of individuals in which there is a generational connection present (i.e., a parent-child relationship is found). Additionally, family members provide close intimate contact (usually characterized by deeply held commitment, trust, respect, and a sense of longer term obligation. It is assumed that sexual intimacy is an element of the relationship between the parents and that this family group seeks to achieve goals by acquiring, allocating and distributing resources (i.e., time, money, space, and close personal contact) (Day, 2010, p. 14).

A family is “a psychosocial group constituted by at least one adult member and one or more others who work as a group toward mutual need fulfillment, nurturance, and development (Fitzpatrick & Wamboldt, 1990 quoted in Edwards & Graham, 2009, p. 193).

Families are who you love. Our families all “look” different and it’s always been so. A family caregiving unit might consist of a couple; a mother, father and children; a single parent and child; grandparent and grandchildren; a sibling group; a circle of friends; or however that family defines itself (Family Ties).

Perhaps in the broadest sense of the word, a family is a group of people who have intimate social relationships and have a history together (Leeder, 2004, p. 25).

Which definitions of family make sense to you? How would you define family?

3 Responses to Some definitions of family