After four years as the convenor of Transition Newcastle, I decided it was time for me time to step down and create space for new ideas and new energy. The following is my final convenor report to the Annual General Meeting.

I often wonder how we are going to look back at 2014. I’ve tried not to be too political in this role, but at times it has been hard. The following headlines give a picture of why I feel the need to speak out.

As many of you know, most of my works is built on a strengths-based approach where we focus on skills, passions and possibilities rather than deficits, deficiencies and pathologies. But it can be important to acknowledge the challenges we face. At times we need to acknowledge the pain, depression and anger that many of us feel at the lack of action on the environmental sustainability.

One of the reasons, however, that I become involved in Transition Newcastle, and will continue to be active, is that we are not just a protest movement. Our focus is on how we can build strong, resilient communities able to transition to a more sustainable future. An important part of this process is building hope and I believe that grassroots community building and local action help create a sense of hope.

The world is a tipping point. The question is: will we act soon enough? I’m hoping that Paul Gilding, the author or the Great Disruption is right when he predicts that 2015 will be the year the dam of denial breaks.

I’m convinced that Transition Newcastle plays an important role in helping to create the context in which change can happen. We need groups who are politically active and who campaign against coal mines, rampant development etc, but we also need groups like Transition groups who explore alternatives and create a groundswell of people who care.

In many ways Transition Newcastle did some great work during 2014.

I must admit, however, that I also have a number of questions about our work.

There is clearly interest in Transition Newcastle: we have 222 followers on Twitter, 857 people like our facebook page and 954 people have signed up for our email newsletters. But last year we only had 28 financial members, and so far this year only 21 people have become members. How can we encourage our supporters to become more involved so that we can grow the movement and initiate more practical projects?

Running a grass roots organisation like Transition Newcastle takes energy and passion. I actually think we have a lot of untapped potential and that we have a strong future. At the moment nobody has put up their hand for the convenor role, so we may have to look at how we can devolve some of the convenor’s roles. (Which could have some advantages.) We’ve been going for around seven years, and I think we have a solid base. If you have been thinking about becoming more involved, now would be a great time to roll up your sleeves and come on board. You don’t need to put your hand up to be convenor, but it would be great if you would consider joining the group working on Transition Streets, helping out with the NNUTS stalls, joining the organising committee or even starting a new project. 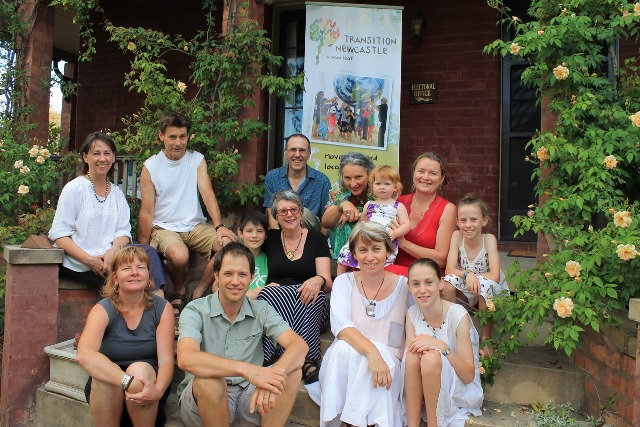 As I said running Transition Newcastle does take a lot of work and I want to thank a few people, even though there is a danger of leaving people out.

I want to start by acknowledging that Transition Newcastle is just one group working for a more environmentally responsible world and I think we are at our strongest when we are collaborating with other groups.

A range of people have been involved in organising events for us such as the Holmgren/Foss afternoon and a stall we had at last years’ Newcastle Show. Thanks.

Thanks to Annie and the NNUTS volunteers for their ongoing work at the markets.

We appreciate Hunter Water’s support of Transition Streets through funding and for providing an energy and water efficient washing machine we are going to draw tonight. (It was an incentive to encourage Transition Streets participants to return their evaluation surveys)

Thanks to Hamilton Uniting Church who have provided us with a venue to use.

Thanks to the Transition Streets contacts who have again played an important role in the program because without their energy it could not work. Thanks also to Will for his work in coordinating the groups and Lesley for her work with the National edit.

Without the office bearers and committee members we wouldn’t be able to operate. Thanks in particular to Allan as secretary and Katy as treasurer. Thanks also to Susan for letting us use her house for meetings (and for the passion she brings to the group), and to Wendy who has brought new energy to the group and has been helping to build new connections.

Thanks to Stuart for providing us with a range of environmental products to sell and for his general support and encouragement.

I’m very grateful to Cathy, Jasmine and Alexa for their support over the years. Cathy puts in many hours work for the group (particularly in relation to the Transition Streets workbook and the Pantry) and the girls often come along to events or meetings, have people invading the house or have to cope with distracted parents. They never (OK rarely) complain and we’re lucky to have such wonderful daughters.

Finally thanks to all of you for coming along and I look forward to another interesting year with Transition Newcastle in 2015.