What is evidence-based practice?

Posted on 14 September 2016 by Graeme Stuart

Although there is no universally accepted definition of evidence-based practice in social work and family work [1, 2], it is generally described as a decision-making process that incorporates: 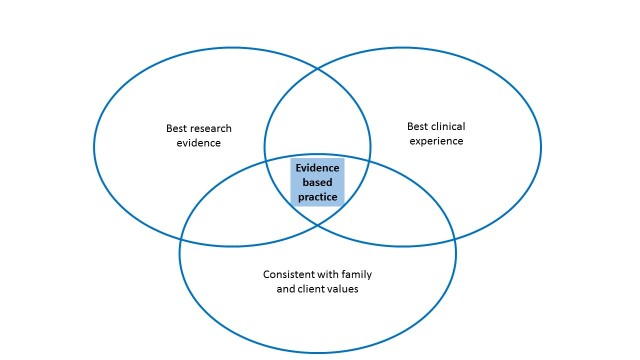 The dominant model of evidence-based practice involves a five decision-making model originating from evidence-based medicine [6, 8-13]. According to Plath [8] the five steps are:

(2) Track down with maximum efficiency the best evidence with which to answer the question.

(3) Critically appraise the evidence for its validity, impact and applicability.

(4) Apply the results of this appraisal to policy/practice decisions. The appraised evidence, clinical expertise and client circumstances are integrated to inform practice decision making. This involves assessment of similarity of practice case to those studied, access to the interventions described in the literature, weighing anticipated outcomes against other demands, practical matters and client preferences.

At times two additional steps are included: Become motivated to apply evidence-based practice and teach other to follow the same process [6].

What is meant by “best evidence” varies greatly. For some authors, this involves an emphasis on “more rigorous” [4, p. 2] research methodologies (e.g., systematic review, random controlled trials and quasi experimental designs). Other authors have a much broader understanding of what constitutes relevant evidence [14, 15].

While there is little argument that evidence is important to practice, there are a number of criticisms of a narrow understanding of evidence-based practice. Criticisms include [1, 4, 14, 16]:

There is an increasing emphasis on evidence-based practice in social work, family work and community development [20-25] community development and there is wide agreement that practitioners need to ensure they are making a difference and that they are contributing to family and community well-being. Despite limitations, evidence-based practice is one approach that can support practitioners to take up the challenge.

In coming posts I will also discuss evidence-based programs and evidence-informed practice.

4 Responses to What is evidence-based practice?