What are evidence-based programs?

Posted on 15 September 2016 by Graeme Stuart 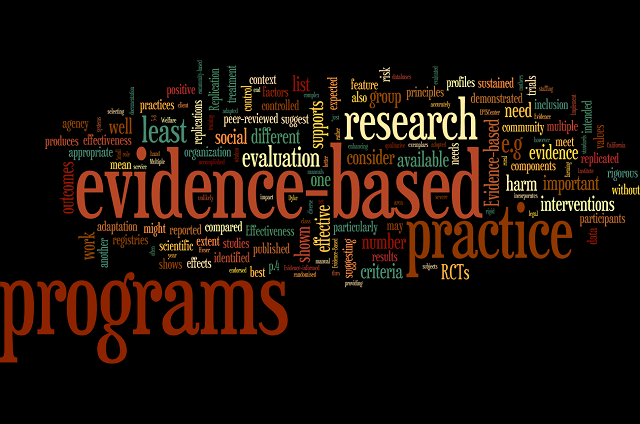 While evidence-based practice is a decision-making process that incorporates the best research evidence, the best clinical experience and family and client values; evidence-based programs are programs that have been standardised, systematised and rigorously evaluated.

According to Williams-Taylor [1], evidence-based practice is an

Evidence-based programs, on the other hand, are:

Programs comprised of a set of coordinated services/activities that demonstrate effectiveness based on research. Criteria for rating as such depend upon organization or agency doing the rankings. [Evidence-based programs] may incorporate a number of evidence-based practices in the delivery of services. [1, p.4]

A program is judged to be evidence-based if (a) evaluation re-search shows that the program produces the expected positive results; (b) the results can be attributed to the program itself, rather than to other extraneous factors or events; (c) the evaluation is peer-reviewed by experts in the field; and (d) the program is “endorsed” by a federal agency or respected research organization and included in their list of effective programs. (p.2)

To be classified as “Well-supported by research evidence” on the California Evidence-Based Clearinghouse for Child Welfare the research needs to meet the following standards:

1. Multiple Site Replication and Follow-up:
– At least two rigorous randomized controlled trials (RCTs) in different usual care or practice settings have found the practice to be superior to an appropriate comparison practice.
– In at least one of these RCTs, the practice has shown to have a sustained effect at least one year beyond the end of treatment, when compared to a control group.
– The RCTs have been reported in published, peer-reviewed literature.
2. Outcome measures must be reliable and valid, and administered consistently and accurately across all subjects.
3. If multiple outcome studies have been published, the overall weight of the evidence supports the benefit of the practice.
4. There is no case data suggesting a risk of harm that: a) was probably caused by the treatment and b) the harm was severe or frequent.
5. There is no legal or empirical basis suggesting that, compared to its likely benefits, the practice constitutes a risk of harm to those receiving it.
6. The practice has a book, manual, and/or other available writings that specify components of the service and describe how to administer it. (Source)

The Australian Institute of Family Studies takes a slightly different approach in their evidence-based program profiles. They argue that:

It is recognised, however, that many effective social and community-based interventions are unlikely to feature in such databases, as testing by methods such as randomised controlled trials are often ethically and practically unsuitable. Evidence-informed practice frameworks and less scientific means of evaluation may be a more suitable method of assessing social and community interventions, particularly those taking place in complex social environments.

The criteria they use for inclusion in their profiles is thus:

Once a program has been tested and shown to be effective, it also important to consider if it can be successful in real life conditions and also to consider that impact of changes to the original program. In particularly we needed to consider fidelity and adaptation. Fidelity is the “extent to which an enacted program is consistent with the intended program model” [3, p. 202], while adaptation involves modifying or enhancing a program, without compromising the core components [4].

It is important to recognise the just because a program has been shown to work in one context (e.g., an urban, middle class area) or with a particular group (e.g., mothers), it does not necessarily mean that it will work in another context (e.g., a rural farming community) or with another group (e.g., fathers) [5-8]. While there is debate about the extent to which programs can be adapted without impacting their effectiveness, some research suggests that “sensitivity and flexibility in administering therapeutic interventions produces better outcomes than rigid application of manuals or principles” [7, p. 14].

Once a program is selected it is also important to consider program fidelity (staying true to the original program design) and adaptation (ensuring the program is appropriate for the context). Read more about fidelity and adaptation here.

Evidence-based programs can play an important role in providing support to families and communities, but there is still a need for practitioner wisdom and a need to listen to the insights, experiences and wishes of the people we work with.