Five things that scare me about Trump as president 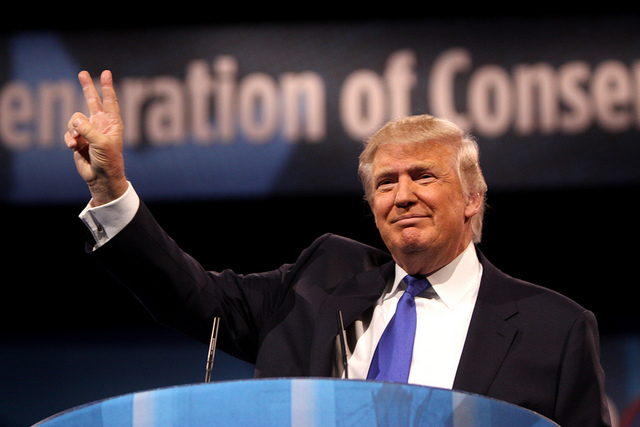 Later this week, Donald Trump becomes the 45th US president. Even though I live in Australia, the election gripped the nation and received a great deal of media attention.

I was one of those people who couldn’t believe he had a chance and enjoyed the joke that the USA saw it as an election and the rest of the world saw it as an intelligence test.

Like so many others I totally misjudged the situation and now have to readjust to the reality of a Trump presidency.

I am genuinely fearful about the implications and what it means for the world. Here are five things that scare me.

The concept of global warming was created by and for the Chinese in order to make U.S. manufacturing non-competitive.

His energy plan commits him to:

While his position has softened somewhat (e.g., more recently he claimed ““I think there is some connectivity. Some, something. It depends on how much” and that “I’m looking at it [the Paris Climate change agreement] very closely. I have an open mind to it”) it seems very unlikely that climate change will be a priority for his government.

Despite record temperatures, extreme weather, shrinking ice sheets and ocean acidification (to name a few) highlighting the need to address climate change as a priority, many of his nominees for cabinet positions have expressed doubts about climate change, have close ties with fossil fuel companies or have resisted measures to reduce carbon emissions.

I’m scared that the Trump presidency means we will lose even more time before taking serious action to transition to a low carbon future.

I became active in the peace movement in the 1980s when Ronald Reagan was President and the nuclear arms race escalated. I’m scared we are entering another nuclear, and conventional, arms race.

He is an advocate of “peace through strength” and has said he will overturn cuts to military spending and will rebuild the USA’s “depleted military”. All this is in the context of advancing “America’s core national interest” and his promise to “make America great again!”

Given Trump’s reactive and aggressive response to many issues I’m scared that a military build-up makes war more likely.

3. His disregard for truth and facts

Trump clearly has little respect for truth and facts. Even though lying and ignoring inconvenient truths are standard operating procedures for world leaders, (which the media all too often fails to challenge), Trump is taking them to a whole new level.

Politifact’s Truth-O-Meter regularly analyses statements by American politicians. It has analysed 293 statements by Hilary Clinton, 596 by Barak Obama, and 347 by Donald Trump. They have found that 75% of both Clinton’s and Obama’s statements are essentially true, but only 31% of Trump’s. In fact over half of Trump’s statements have been found to be false or “Pants on Fire” compared to 12% for Clinton and 14% for Obama.

Based on Politifact’s Truth-O-Meter

When there are inconvenient truths, one of Trump‘s stock responses is “nobody really know”.

Was Russia involved in hacking during the election? “Nobody really knows.”

Western democracy relies heavily on accountability, and I doubt that Trump is going to be bothered by many of the traditions that help provide checks and balances. If nothing else, it’s going to be very hard to trust anything he says. His brazen disregard for anything that doesn’t suit him sends a shiver through my spine.

I expect leaders of such a powerful nation to make rational, calm decisions. I know many leaders already fail this test, but Trump’s responses to a wide range of issues are quite immature and irrational. His responses to protesters at his rally, his late night tweets, and his attacks on people who disagree with him are reactive, unpredictable and vindictive.

His attacks on Meryl Streep (“one of the most over-rated actresses in Hollywood”), the founder of Huffington Post (“Arianna Huffington is unattractive, both inside and out. I fully understand why her former husband left her for a man – he made a good decision”) and Republican Rand Paul (“reminds me of a spoiled brat without a properly functioning brain”), highlight a destructive approach to conflict.

I’m scared of somebody like this being the Commander In Chief of the United States Armed Forces and having to make decisions that affect millions of other people.

The machinery of politics prevented Obama from living up to many people’s expectations when he became president. It’s possible the same will be the case with Trump, but when I look at the people surrounding him, I’m far from confident.

Many of his cabinet nominees are raising alarm bells in a variety of areas including climate change, science, the influence of very wealthy business men and delays in completing a required ethics review process and filing financial information.

I fear his agenda when he asks a prominent anti-vaccine crusader to lead a new government commission on vaccine safety and scientific integrity, wants to appoint an education secretary who claims that public school system is a dead-end, and nominates a climate change sceptic who describes himself as a “leading advocate against the EPA’s activist agenda” to head the Environmental Protection Agency.

There are also serious concerns about the possible influence of his family on the presidency and his potential conflicts of interest.

There is little indication that those around him will be able, even if they want to, combat some of his excesses. Frankly, I’m scared what the future holds.

To quote Trump, “Nobody really knows” what a Trump presidency does mean for the future of the USA and the rest of the world. I hope my fears are an overreaction – but I don’t hold much hope.