Why I voted YES in the same-sex marriage postal vote

Posted on 3 October 2017 by Graeme Stuart 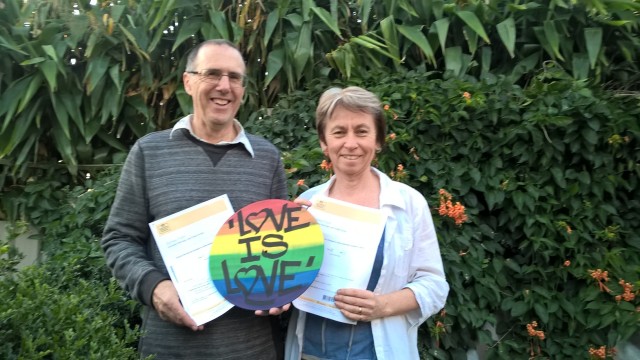 I try to be fair and to understand other points of view, but to me the YES case in the same-sex marriage postal vote is largely based on love, acceptance and justice, while the NO case is largely based on fear, exclusion and poor logic. I am NOT suggesting or inferring that the people who are voting NO are unloving and have no legitimate concerns, but I am saying they do not have a strong case. Nor am I saying the YES campaign has always been conducted with love and acceptance towards those who are opposed to marriage equality.

There are three main reasons I voted YES.

I believe in equality and social justice.

Imagine being on your honeymoon with your legally married husband or wife, when your partner suddenly dies in an accident. Amidst your overwhelming grief, pain and confusion, you discover that your relationship will not be recognised, so the death certificate says your partner was “never married,” your partner’s father is listed as next of kin and he has to approve all the funeral arrangements. This is what happened to a same-sex couple from the UK while honeymooning in Adelaide in 2016.

While most states (but not all) now allow same-sex couples to register their relationship, they do not have the same social status as marriage, and there are some small but significant differences (e.g., they are less likely to be recognised overseas).

We have learnt a great deal about human sexuality since homosexuality was seen as a disease or immoral, and there is no doubt there are many loving, long-term, stable same-sex relationships. It is not fair or just to say that these relationships are inferior to hetero-sexual relationships and to deny them the opportunity to have their love publically recognised through marriage.

It is a legal question NOT a religious question

Fortunately our laws are not modelled exclusively on the Bible—I do not want someone who curses their mother or father to be put to death or for there to be a ban on eating seafood without fins or scales. There are also some transformational laws in the Bible, but I do not see many of the people who oppose same-sex marriage on religious grounds calling for the introduction of the Jubilee year where prisoners are freed and debts forgiven every 49 years.

There may be concerns about religious freedom but this is a separate issue that needs to be addressed and should not be used as an excuse to deny other people legal rights.

I believe in love and acceptance

Finally, I believe in love and acceptance. People who believe they can love and accept gay and lesbian couples while denying them the same legal rights as other couples, are kidding themselves. It would be like saying you loved and accepted Aboriginal people but voting NO in the 1967 referendum which asked if Aboriginal people should be counted in the census and if the Commonwealth should be able to create laws for them.

In so many ways, gay and lesbian couples are the same as Cathy and me. After over 30 years of marriage, I still believe there was value in publicly affirming our commitment and intent. I want same-sex couples to have the right to make the same commitment.

As a community we have come a long way and most people now recognise that same-sex attraction is more than simply a choice. Saying YES will show we value and honour same-sex relationships, and help demonstrate acceptance and celebration of diversity. So much harm is caused by stigmatising and vilifying same-sex attraction and, hopefully, extending the same legal recognition of their relationship as hetero-sexual relationships will help reduce some of the pain and grief it causes.

If you find any problems with the blog, (e.g., broken links or typos) I’d love to hear about them. You can either add a comment below or contact me via the Contact page.